I began making crostini about 16 years ago and they are still one of my favorite starters to make any time I have guests coming over. They are so simple to make and they taste delicious!

They look so elegant just served on a white plate or cake stand. If I’m feeling extra creative, I’ll pick hydrangea leaves from my garden, wipe them down with a wet cloth to clean them, and then place them underneath the crostini. I love doing simple things like that to give food an extra special presentation!

Crostini are similar to Bruschetta and are sometimes confused as the same thing but they are a little different: Crostini means “little crust” or “little toast” in Italian. While Bruschetta comes from the Italian word Bruciare which is translated as “to burn” or “to roast over coals.” It was a way to salvage stale bread by grilling it, then drenching it with olive oil and then rubbing garlic onto it for added flavor.

Both Crostini and Bruschetta refer to the bread itself and not the toppings. So they can both be topped with anything you like. However, bruschetta is for the tomato basil toppings.

I still use the technique of rubbing garlic onto my crostini for that added layer of flavor.

The ingredients in this recipe are a match made in food heaven!

Creamy Brie cheese is absolutely perfect in this recipe! Brie cheese has a very subtle cheese flavor and is just ooey gooey goodness when it’s melted. If you’ve never tried brie cheese, then you’re in for a real treat!

Beautiful Forelle pears are slightly sweet and a little tender yet crisp and they complement the flavor of the melted brie cheese perfectly.

Pecans add a slight crunch with an aromatic nutty flavor that goes perfectly in this dish.

The honey in this recipe adds a depth of flavor and texture that enhances all of the other ingredients and caramelizes the pears beautifully.

I begin with a crusty baguette which I slice on the diagonal as it not only looks more elegant but it also give you more room on the baguette slices to fit all the ingredients.

I then lay the baguette slices onto a baking sheet.

Butter is cut into thin slices.

Each baguette slice is then topped with a small piece of butter.

The baking sheet is then placed into the oven until butter is melted and baguette slices have turned slightly golden brown.

The warmth from the toasted baguette is going to allow the garlic to just melt into it. This is going to give the baguette a subtle garlic flavor that complements the other ingredients perfectly.

If you want to see a visual on how to do this, you can watch this very quick 17-second video I created so you can see how to do the garlic rub on the warm baguette slices.

Then brie cheese is placed on top of each baguette slice.

A slice of Forelle pear is then layered on top of the brie cheese slices.

Then chopped pecans are sprinkled on top of each crostini slice.

Honey is then drizzled on top of each crostini slice.

Pop baking sheet into the oven until brie cheese has melted and crostini have become a golden brown.

Remove crostini from baking sheet immediately and then place onto serving dish.

The pear will oxidize and change into a gorgeous caramel color the longer they sit. Personally, I love them more at this color.

Thanks for visiting! Sign up below and be the first to know when a new post goes live! 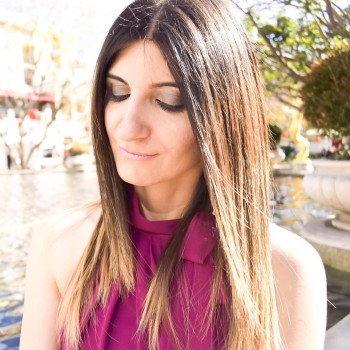 Lover of pretty-sugar-things! Join me as I share my love for food and Entertaining! Around here, you'll find creative twists on classic recipes for simple entertaining at home. Read More…

Thanks for visiting! Sign-up to stay up to date with the latest!

Can a cookie get any prettier? 💗 This easy to m

Heidi Hourani is a participant in the Amazon Services LLC Associates Program, an affiliate advertising program designed to provide a means for us to earn fees by linking to Amazon.com and affiliated sites. As an Amazon Associate, I earn from qualifying purchases.

Thanks for visiting! Subscribe to stay up to date with the latest!

Can a cookie get any prettier? 💗 This easy to m